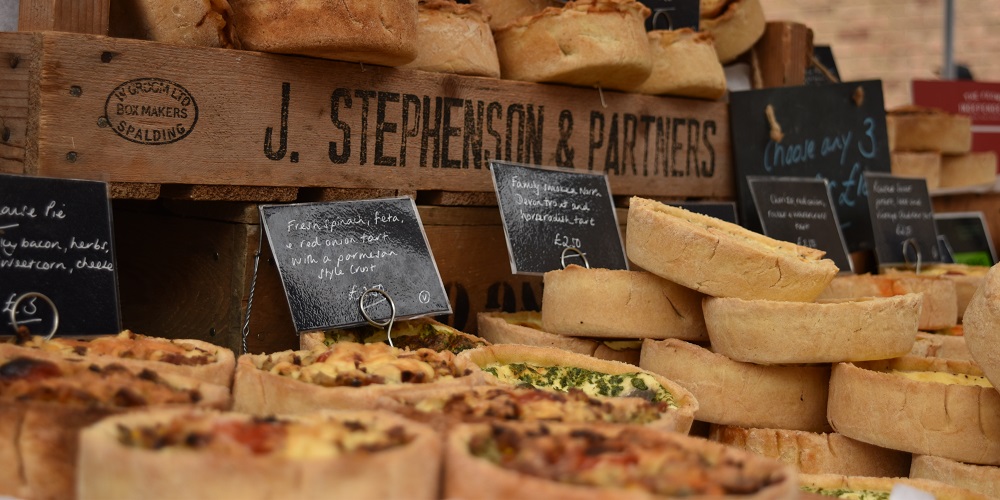 10 of the best farmers’ markets in Somerset

Looking for farmers’ markets in Somerset? Look no further. We’ve rounded up some of the biggest and best. Why not try and visit all of them?

Of all the farmers’ markets in Somerset, this is one of the most popular. Held in a 400-year-old market square in the centre of the ancient town of Axminster, the outdoor canopy market is now in its 14th year and won the 2015 Taste of the West Hospitality & Retail Awards Gold Award. There are around 25 stalls where you can buy local produce including Harry’s Cider, made from 100% juice, baked goods from third-generation, family-run artisan bakery Taylors, and unique gifts from Mendip Lavender, created from flowers grown high up on the Mendips.

From fruit and veg to freshly baked pies, bread, organic meats and more, every product sold at this urban market, held at Bath’s Green Park Station, is sourced from within a 40 mile radius of the city. New traders are constantly being added to the mix so there’s always something new to taste, and the stallholders pride themselves on being friendly and sustainable in their approach.

On winning a Silver Award at the 2015 Taste of the West Hospitality & Retail Awards, this 20-stall market was praised for the excellent quality of the products on offer. These include everything from cider and cheese to fruit and flowers, all grown and produced in the local area. Visit the market in the pedestrianised Falkland Square, then explore the great range of pubs and cafes the town has to offer.

This well-established and popular market is located in Frome’s Cheese & Grain Market Hall, and offers a wide variety of produce as well as a friendly on-site cafe. The market won a Gold Award in the Taste of the West Hospitality & Retail Awards 2014.

It may be renowned for it’s annual rock music festival, locals love Glastonbury for its monthly farmers’ market, held in the centre of town around Market Cross, just a mile from Glastonbury Tor. In November, the market joins up with the Frost Fayre, offering seasonal food and drink, Santa’s grotto, free entry to Glastonbury Abby and much more.

This popular market has a good mix of stall holders offering traditional and artisan produce from across the region, including game meats, craft cider, and gluten free cakes. You can often find local musicians, bands and performing arts groups entertaining visitors, and there are plenty of grassy spaces where you can sit and listen while enjoying a snack from one of the refreshment stands.

This award-winning market has an excellent selection of local food and drink producers, as well as an alfresco cafe area where visitors can sit and enjoy homemade refreshments. There is also a guest area for crafts and community stalls, and in 2015 the farmers’ market joined up with a nearby craft market, making it a top destination if you’re looking for a unique and locally made gift.

Taunton Famers Market is a genuine Farmer and Producers co-operative, launched in 1999 and fully certified by FARMA, the National Farmers’ Retail & Markets Association. Many of the stalls offer unique products not found in the supermarkets, including a wide range of chutneys and preserves, regional cheeses and handmade bread, and most will let you ‘try before you buy’.

This dog friendly market – which was named Best Farmers’ Market of the year in the Somerset Life Food & Drink Awards in both 2005 and 2012, and won the 2014 Taste of the West Gold Award – is held in the honey-coloured sandstone Old Stable Courtyard at the National Trust’s Montacute House. It boasts more than 30 stalls selling a variety of traditionally made and artisan food and drink, as well as local crafts, plus there’s free parking for visitors.

This long established market is relatively small but very popular, having won a number of accolades including a Gold in the 2015 Taste of the West Hospitality & Retail Awards. The farmers’ market adjoins the excellent general market, and twice a year they host a funfair, as well as other events including charity boules (petanque) competition.

Which are your favourite farmers’ markets in Somerset? We’d love to hear from you.