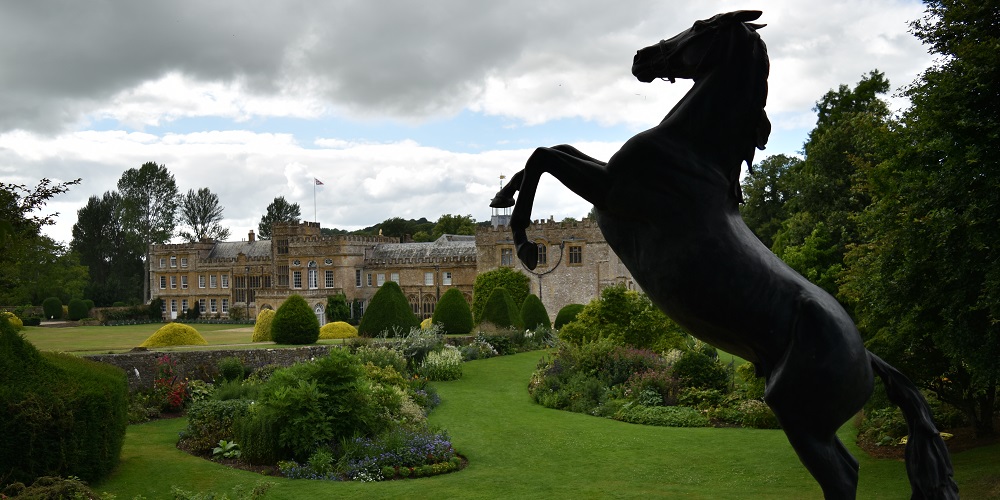 Originally a monastery for 12th century Cistercian monks, today Forde Abbey is an astonishing private home and garden open to the public. It wasn’t at all what I was expecting – it is not a simple, slightly austere monastery, but rather a beautiful, at times even decadent-looking home, with echos of the monks life such as the pretty cloister and hidden abbey. Forde Abbey has been used as a filming location for Far From The Madding Crowd, Restoration, and Daniel Deronda, as well as some Rosamunde Pilcher dramas, and it is easy to see why.

You enter through the shop and it is hard to avoid browsing before you’ve even begun your visit! Dark clouds were looming the day we visited so we chose to start in the house and hope for sunshine when we explored the gardens later. We reluctantly dragged ourselves out of the shop and headed up the garden path through the pretty kitchen garden. Again it was very easy to get distracted by the walled garden, the gallery, signs for ice cream in the cafe and stroking the ancient horse, but we eventually made it round the back of the house to begin our tour.

We began with a sneaky peak in the chapel, complete with beautiful vaulted ceiling and carved oak screen, then headed through the archway of Chard’s Tower. Here we met an incredibly helpful volunteer who told us about the abbey, armed the children with an activity leaflet and me with a guidebook. As it is a private home, the only place you can take photos is in the cloister at the end of the tour.

We started in the Forde Abbey’s Great Hall, a huge space with magnificent oak panelling and painted ceiling. Look out for the 14th century statues of St Catherine and Queen Margaret, found by chance during drainage works to the Chapel wall. From the Great Hall we headed up the sumptuous Grand Staircase, with its elaborate ceilings and impressive carved balustrade, which takes you to the elegant Saloon. Here you’ll find another gorgeous plaster ceiling, huge tapestries woven from cartoons painted by Raphael that are now on display in the V&A museum, and a stunning green malachite-topped table from St Petersburg.

Next, through the Tapestry Passage and onto the Crewel Room, with its solid Jacobean bed whose curtains and cover are adorned with intricate stitchwork (Crewel). Then into a much bigger space; the Upper Refrectory. I love the story of why this was built. The Cistercians were originally vegetarians, but during the reign of Henry VII, they relaxed their rules and were allowed to eat meat. However, not everyone in the Order agreed with this, and so the Upper Refrectory was built above the original refrectory to allow meat eaters and vegetarians to eat separately! There is a lovely oak beam roof and wood panelling in this room, together with a huge 20 foot refrectory table made from a single tree from the estate. From here, you enter the State Rooms, where you will see more intricate plaster ceilings made by the same person that did those above the Grand Staircase, and some huge four poster beds. In the Bentham Room, the red damask hangings were made for Queen Anne’s visit in 1714; alas the queen died before setting out and never made it to Forde Abbey.

You finish the tour in an area of complete contrast with the rest of the Abbey, reminiscent of its roots as a monastery. First is the Monks Dormitory is a huge stone-flagged gallery that used to be twice as wide, and is where the monks had their spartan cubicles. In later years it became servants quarters, but it is easy to imagine the monks in their cubicles with nothing but a bed, a desk and a candle. Finally, my favourite place in the whole building; the Cloisters. This is such a pretty, peaceful space, and was used by the monks for walking and meditation. It is a delightful end to the tour of Forde Abbey.

After all that walking, we recommend The Undercroft cafe for some Baboo gelato, handmade in nearby Bridport. The cafe uses produce grown at Forde Abbey or sourced from local producers, and is definitely worth having a break there. Once we refuelled, we explored the gardens, starting at the beautiful herbaceous borders along the Long Pond, to the Temple, which gives an excellent photo opportunity of the main building, then round the Mermaid Pond, with its statue of Leda and the Swan, up to the Great Pond.

Although the grounds are 30 acres all together, it feels relatively compact and is an easy walk back along the Ha Ha to the Rock, Winter and Park Gardens and the Arboretum. Each area of the garden gives a different perspective to Forde Abbey and it is well worth a wander.

Do remember to leave yourself enough time to explore the walled kitchen garden before you leave. This is a really special place, particularly if you are a keen gardener or simply love flowers and plants.

Child friendly? Children under 15 go free and there are activity sheets for young visitors to complete in the house

Dog friendly? Well-behaved dogs on a short lead in the gardens and in the cafe, but not the house

Feeling inspired to have a break in Dorset? Check out our great range of holidays in Dorset and book directly with the owner for the best rates.