Devon is such a diverse county. From sand and pebble beaches to rough and rugged moorland and some of the UK’s most spectacular rural countryside – not to mention bustling cities like Exeter and Plymouth, and the coastal towns that make up the English Riviera – every taste is catered to in this, the UK’s second largest county.

Devon is the only English county with two separate coastlines. In the north, spectacular beaches such as Woolacombe and Croyde attract surfers from around the country, while to the south the Jurassic coast – England’s first World Heritage Site – offers dramatic red cliffs and the chance to go rock pooling and fossil hunting with the children.

Active and outdoorsy holiday makers are well catered for in Devon. There are 150 miles of National Cycle Routes including the Tarka Trail and Devon Coast to Coast cycleway, not to mention opportunities for sailing, horse riding, golf, sea and river fishing, diving and more.

And if that weren’t enough, the county boasts five areas of Outstanding Natural Beauty and two National Parks to explore. Exmoor is an International Dark Sky Reserve, making it an ideal spot for star gazers at night, while Dartmoor, with its dramatic granite tors, is the largest open space in Southern England and formed the backdrop to many of the scenes in Steven Spielberg’s War Horse.

As a complete contrast to the wilds of the moorlands, travel to the south coast of Devon to enjoy the famous English Riviera, made up of quaintly British towns such as Paignton, Brixham and Torquay, where Agatha Christie grew up and where there is still an annual festival in her honour. Or, if you fancy reconnecting with city life, take a trip into Exeter for great shopping, food and culture.

With all that Devon has to offer, it’s no wonder that Cartwheel Holidays’ accommodation is similarly varied. Pet owners will also be pleased to know that a number are dog friendly – as are many of Devon’s beaches. 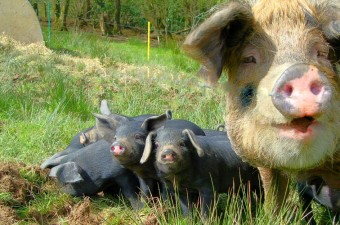 Farm holidays in Devon will leave you feeling relaxed and revitalised. The first thing that strikes you when you arrive on a farm break is the peace and quiet around you. All you can hear is nature; babbling streams, the wind in the trees, birds singing and the sound of farm animals. Cartwheel farms offer the opportunity to experience first hand a different way of life.